Nailing Down the Saint

Out now in NZ and Australia, Penguin Random House/Vintage 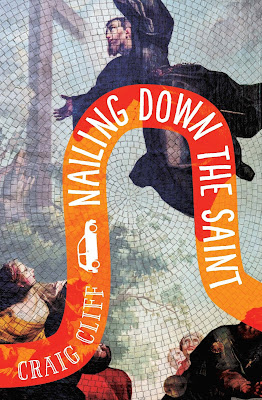 
This smart, funny, thought-provoking novel is full of surprises.

Duncan Blake is a Kiwi filmmaker whose move to LA has not gone to plan. After a series of setbacks, he’s working at a chain restaurant, his marriage is on shaky ground after a porn-related faux pas and his son won’t stop watching Aladdin.

When Duncan gets the chance to scout locations for a fêted director’s biopic of Saint Joseph of Copertino, it’s the lifeline he’s been searching for. But in Italy, in the footsteps of the seventeenth century levitator, he must confront miracles, madness and the realities of modern movie making.

A novel about the pursuit of dreams, the moral calculus it entails, and the possibility that the rational, materialist worldview isn’t all it’s cracked up to be.

The word on the street

"It's entertaining and inventive... a novel full of surprises." David Hill, NZ Herald

"[Cliff] presents a diverse, Pynchon-esque millieu of fast-talkers and fantasists, con artists and cultists, and people just trying to get by... all wrapped up in a vastly entertaining package that has its doubts about the value of both scepticism and belief." Paul Little, North & South

"And he is such a clever writer of prose that there are many points at which you feel the urge to nudge someone next to you, to point, and to exclaim: did you see that? Did you?" John McCrystal, NZ Books

"As Duncan pursues his dreams and hopes, author Craig Cliff wraps a number of other factors into the mix, including science and scepticism and gender and privilege. Excellent reading from this New Zealand author." Jacquie Webby, Oamaru Mail

"Our protagonist slowly learns that the believer and the cynic, doubt and certainty frequently coexist. Nailing Down the Saint is characterised by fresh energy and constant sparring." Jessie Neilson, Otago Daily Times