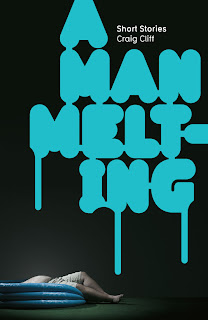 A son worries he is becoming too perfect a copy of his father. The co-owner of a weight-loss camp for teens finds himself running the black market in chocolate bars. A man starts melting and nothing can stop it, not even poetry.

This terrific collection of stories by an exciting new talent moves from the serious and realistic to the humorous and outlandish, each story copying an element from the previous piece in a kind of evolutionary chain. Amid pigeons with a taste for cigarette ash, a rash of moa sightings, and the identity crisis of an imaginary friend, the characters in these eighteen entertaining stories look for ways to reconnect with people and the world around them, even if that means befriending a robber wielding an iguana.

Why you really oughta buy the book

Other reasons to buy A Man Melting

1) You're related to Craig by blood or marriage
2) You are Craig's mechanic, accountant, dentist, supervisor-one-removed, former teacher, or best friend from kindergarten
3) You collect books by authors with two first names
4) You have read the other 56 works longlisted for the 2010 Frank O'Connor Prize
5) Someone you secretly think is cooler than you said they liked it
6) You love lists.

The word on the street

"...it is a pleasure now to see the full range of his striking talent in this collection." - Owen Marshall

"A Man Melting is simply the best new collection of short stories I have read in an age." - Nicholas Reid, New Zealand Books, Winter 2011

“The book encapsulates what the best short story should do: resonate and hone how we see our world. I often read a book and wonder who I’d recommend it to. The reader who loves magical realism and wacky scenarios? Or the fan of realist stories, full of character and place? A Man Melting is that rare collection I’d honestly recommend to both types of reader. There are stories here I’ll simply never forget.” - Angela Readman, The Short Review

"Craig Cliff's first collection of stories heralds the arrival of an electrifying new voice on the New Zealand writing scene. These stories are perfectly formed, standalone gems, but the collection also brings together satisfying harmonies as a whole." - Paula Green, NZ Herald

"Cliff's quarry is the human heart and he hones in on it with fierce accuracy. His characters are lonely in a hundred ways, but never irreparably. The stories come up tender and cheerful and true." - Kate Duignan, Landfall #220

"A Man Melting examines all the big questions of life - birth, infancy, adolescence, violence, parenthood, death - and does so in fresh and intriguing ways. Given the youth of its author, this fact, like the book itself, is an astounding feat." - Siobhan Harvey, The Listener

"These are stories with clout, the sort teenagers might describe, if they were to read them, as being 'pretty on to it'. Strong openings, jaunty plot lines and endings that come too soon." - Marion Gilbertson, The Nelson Mail

"He's good at snappy openings and the 18 stories zip along, so I'm sure this young Wellington civil servant won't mind me saying it livened up quite a few bus journeys." - Dr McLean, Otago Daily Times

"Quirky, funny stories from a local writer to watch." - The Sunday Star Times

"...gorgeous insanity is the purview of Craig Cliff... [His] deft use of language and clever thematic threads - elements from earlier stories pop up in those that follow - will pull you into the stories and his oddly charming characters will keep you there.” - Kylie Klein-Nixon, Kapi-Mana News

"The eighteen short stories are truly insightful and amplify many of the absurdities around us, reflecting our own expectations, fears and paranoia on the big questions in life. This book is of the moment, and is rightly at home on a global platform. Cliff is a talent to watch and set to take the literary world by storm." - 2011 Commonwealth Writers Prize press release.

Where to buy A Man Melting